Wasn’t intending to  sew a 3rd tank right now. It’s too close to fall to be sewing summer things. But I had just done a good job straightening my fabric when this red stripe decided to be a nuisance again.

I bought this  knit  on-line and was disappointed when it arrived. It was advertised as a rayon knit. Which it was but the knit was so thin.  What’s up with that?  The last few years I’ve stopped buying “sweater knits” because they are aren’t going to make anyone sweat. Transparent sweater knits for heaven’s sake. The white stripe of this knit is almost that bad. Anything dark (know of any darker body spots on the upper body?) are going to show. In addition to that, there were two worn spots like this:

I didn’t ask for a refund. I figured there was enough for a tank top and as insubstantial as the fabric was, I wouldn’t be using it for winter wear. I folded and put it in my stash. Where it, like the fabric of the previous TRTank, rolled about causing me endless work just keeping it out of the jaws of the Roomba.

Finally I had enough and decided another Tank, even this late in the season, would be welcome.  I hung it on a hanger intending to work on it in a day or so. That’s when I realized how slippery it was.  It would not stay on the hanger for more than a few minutes. I started spray starching it. Which  helped with the hanging. I took longer than expected to start sewing with it. So everytime I had to get into the closet, I pulled it out and spray starched again.  Must have starched it 4-5 times. Even then it was a bear to lay out and cut.

I have noticed a few cowl neck tops coming across my Pinterest feed and in RTW.  They make me drool. I like a good looking cowl. So why was it that I couldn’t find a cowl in my pattern stash?  Finally realized that my Fit For Art Clever Crossings variation had a cowl for the surplice and the Neckline variations  had both a shallow and deep drape neckline.  I compared the drape neckline to my T front. The deep  Drape neckline is 2″ wider at CF and about 6″ taller.  Thinking this could make a nice looking drape, I opted to use the deep drape.

Why I didn’t morph the pattern piece into a full instead of half piece, well it’s beyond me.  I used the full back with neckline darts but the front I opted to lay out, cut one side, the flip and cut the other.  That’s when I discovered that in addition it’s other faults, the grain is skewed. I don’t want to hear about how knits don’t have a grain.  I’m telling you that the fabric was twisted and skewed and I had a heck of a time cutting the front and keeping the stripes horizontal. Ditto for the back.  At this point, I hoped I would be sewing a wearable muslin.

Hurrah!  I like the cowl!  It would be OK for it to be a little deeper but this is attractive and modest, two things the FitForArt patterns do very well.  It is obvious that FFA patterns are not drafted for Hollywood stars or others who feel they must reveal all.  I do wish I had used an  extended shoulder.  For a long time I’ve loved the balanced shoulder-with-hip silhouette. Between 120 and up to my current weight, this is the silhouette that makes me the most satisfied with my body.

I’ve really become enamoured with stripes ever since I realized they don’t have to match!  Stripes can be turned in different directions! I cut the sides cross grain.

It’s like a little surprise. Plus I didn’t have to worry about exactly matching stripes. I did try to roughly match but the way this fabric was skewed, I didn’t hope for success. When cutting the back it skewed so greatly, I thought this top would be a wadder. Dead before it was even hemmed. Imagine my relief:

This back view is where I would really appreciate the shoulders being balanced with the hips.

One of my continuing complaints with on-line fabric shopping is the lack of weight descriptions. Oh they say light, medium etc. Or transparent/translucent. I think sometimes, as in buying this rayon knit, that I’ve had enough experience with the particular fiber/weave that I can confidently purchase. Truth is, I’m missing critical info. Had I known how light and squirmy this fabric is, I would not have purchased.  If I get another like it, I’m going to bin it immediately.

I bought this ITY fabric…

….because I was fascinated by the print as it appeared on Fabricmartfabrics web site. When the fabric arrived, it was bright. Like glowing in my hands bright.  I’m not a dramatic person. Not an alpha.  I don’t crave attention nor have I ever had a burning desire to lead the pack.  I’m more of a romantic. Maybe with a gamin twist.  Like many people, I’ve had to adapt my personal inclinations and clothing choices for my job. The point is, can you see why this stunning print could have sat in my stash for a few years?  Well it didn’t really sit. It rolled to one side or the other. Hid between other fabrics. Wiggled forward and onto the floor or backward, also onto the floor where the Roomba would try and fail to eat it.  Recently,  I’ve been forced into straightening my shelves and have picked up this same fabric at least 3 times in the last 2 weeks.  Last time it had rolled  into a tube and was once again working itself into the Roomba Feeding Zone.   I decided to use it.  Right Now.

I also decided to make a couple of changes to my pattern.  First, I cut a copy from from fitted front and back-with-CB-seam.  Labeled these new copies as Knit,  Sleeveless, Extended Shoulder, w/o Bust Dart.  Long label and tedious to write out on all 3 pieces and the envelope where they will reside. Oh, forgot, I also included the date 201908 (which means Aug 2019).

There are 2 other pattern alterations  not discernible from the label.  I trimmed 3/8″ height at the shoulders. I’ve adapted the pattern for the small 3/8″ shoulder pads I always slip into place unless I am wearing a  tank or sleeveless garment. I also added 1/4” to the back and front side seams and on both sides of the side-piece.  1/4″ may have been a little too much. As you can see from the side-view (above) it’s getting a little tenty. The label did include a reference to the rotated bust dart (i.e. the w/o bust dart).  I moved it to the hem.  Started to move it to the shoulder but that would have introduced a lot of fabric above the bust.  I am hollow chested. Lots of fabric in that area = bad idea.  I have in the past simply eased the but dart area to the side piece. I wanted dart-less because I had a difficult time easing on  the previous TRTank.

I scooped the front  neck after cutting out the fabric.  Only thing noted on my patterns is a 7.5″ neckline depth which is the deepest I want.  Any deeper shares “the good china”.  The FOE in the pic is actually a dark, almost purplish blue. It matches the deepest blue in the fabric. There are also black swirls so I could have chosen black FOE. 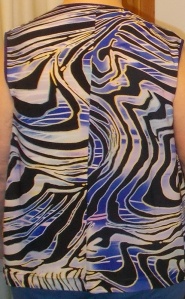 I think the interruption of the printed pattern emphasizes the extra curve created by my round-back alteration and also brings attention to my lower-right shoulder. I love sewing. Love the fit I can achieve.  The problem is, you start noticing little things like the effect of the CB line with a print. You start noticing poor fit and badly used patterns on others as well as yourself. But the real moral of the story is in today’s full-body pics:

No matter how well nice a garment looks during fitting, wear will distort it.  Look closely (click on the pics) at the shorts above and then at the final fitting of same: 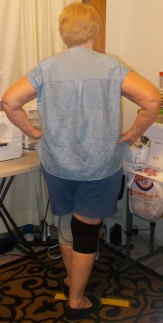 In May 2017, I converted the Tabula Rasa Jacket into a vest by ditching the sleeve and altering the side piece just a bit (detailed here.)   Once that was done, it was a short step to doing the same thing to make a Tank or Sleeveless top from the Tabula Rasa Tee (detailed here.) Then seemingly, I forgot about about this pattern. .   I have a lovely knit fabric which an even more  lovely print I wanted to use, but only had about 1.25 yards.  Suddenly the Tabula Rasa Tee bubbled up in my memory.  Even the long sleeve TRT is amazingly conserving on fabric.

There were 4 vertical repeats of the print. I wanted to use it the best advantage and made both copies of the front and back pieces and converted them into full pieces (vice the normal halves that we use). I also rotated to the shoulder, the dart created for my round-back alteration.  Being summer, I scooped both front and back necklines, just a little.

I wanted to cut the sides from the solid black areas but they simply were wide enough. I chose instead to center the sides along another repeat.

After the first fitting, I let the side seams out 1/4″ from waist to hem. Finished neckline and armscyes with FOE; hemmed at the coverstitch.

I added a 1/4″ ease to the front, back and side pattern pieces for future use.
I had forgotten how much I loved these patterns because I haven’t used them since Oct 2017; almost 2 years. When I pulled out the storage box for the TRT/TRJ , I was amazed at how many variations I have. I really worked this pattern. Why had I forgotten it?  Don’t know, but it’s back in rotation now!!!