Do you mentally visualize your projects?  I was prepping another pattern to use with this fabric: 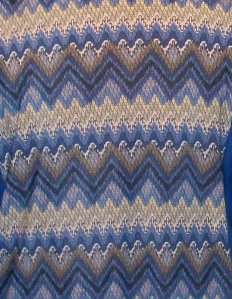 Finished prepping; laid out the fabric and placed the tissues on top.  As I snapped out the light to go upstairs, I thought ” This will never work”. It’s not that the cut pieces won’t sew together and create a wearable top. But as I was visualizing the fabric cut up and sewn into the pattern I just prepped, I realized I wouldn’t like the result.   It wouldn’t be a garment I reached for over and over.

Overnight my mind pointed out that not only is this a Bargello print  it’s also a rather busy Bargello. This ‘flame stitch’ pattern, which is normally is described as being very active or having movement, lacks spaces for the eye to rest on. And, well it’s a horizontal stripe on an ITY fabric. I prefer to avoid horizontal stripes.  I feel they emphasize the rotund parts of me which these days is most of me. But am I reluctant to cut cross grain especially since this ITY is a bit short on stretch.   The good thing with waiting to cut until the next morning, is that my left brain totally revised my plans into a great garment. 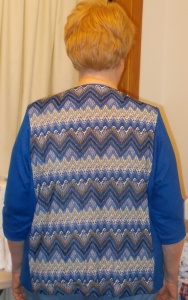 I decided to use my (Fit For Art) Tabula Rasa Tee pattern and the 3/4 sleeve. I know, I’ve now used the 3/4 sleeve for the  last 3 tops. Thing is, I find the 3/4 sleeve to be useful for all but the hottest days of summer and the coldest days of winter. It looks good on my figure too. I’ve used the back pattern piece in which I added an RBA and then rotated the RBA to the neck. There are 2 tiny darts in the neckline but without the center back seam my lower right shoulder becomes less noticeable. 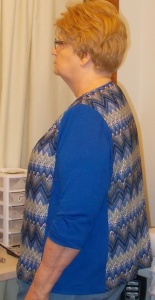 As I scooped up the other pattern pieces and laid out my TRT tissues, I realized that I could reduce some of the business by  making the sleeves and side a solid color.  I debated between this brighter blue and a navy.  Both knits were about the same weight and close to the weight of the ITY. Probably the darker knit (navy) would have been more slimming. My heart just sang with the bright blue and that’s why it won.

To add a little more interest, I once again use the draped front 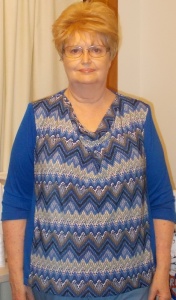 Same drape front pattern piece as the rayon knit, but the drape behaves a little differently.   Possibly because of the sleeves but maybe it is all the difference in fabric.

Really got to love TNT patterns. I started laying out and cutting this at 1PM had it done by 3PM. Partly that’s because I’d done all the thinking the day before.  Also because there was no fitting involved (but might should be) and finally because I’ve made this pattern so many times, it practically sews itself.

One thing I’ve really got to remember is that large prints, plaids and stripes need full pieces instead of the usual half-front, half-back.  It takes only a few moments to make a full-piece and then you have it for use over and over.  The Bargello was not as difficult  as the rayon knit i.e. it wasn’t stretched off grain, but it can still be a challenge to line up the stripes not just between pieces but between sides of the same piece. Great thing about my choice for the solid sleeves and sides? I didn’t have to exactly align the stripes of the front and back. Close enough, was good enough!

Possible fitting needed?  Look at the side views again.  It could be my lack of photography skills that make it look like the back hem is rising in the center. But I’ve also had the issue of the back coming forward as I’m wearing the drape front rayon knit.  Granted it could also be the heavier, drape front creating a forward drag.  I am more inclined to think my back is rounding more and I need to increase my RBA .  Sigh, they don’t tell you this in health classes.  The body continues to change with every year of your life.  Your clothes need to be adapted for the body you have now.