I couldn’t get my first Kendall Top out of my mind. It had looked good at the first fitting. What and when did it go wrong? One evening I read all the Kendall reviews at Pattern Review.com. Most of them were positive with only a a very few issues. One most common was the empire line rising although not as badly as I had experienced (my empire line traveled from below to above the bust prominence). This particular post by mmmberry did show many issues similar to mine but none so bad. (Her issues were bad enough that she concluded it was not a pattern for her).  What really jumped out at me is clearly shown in this pic: 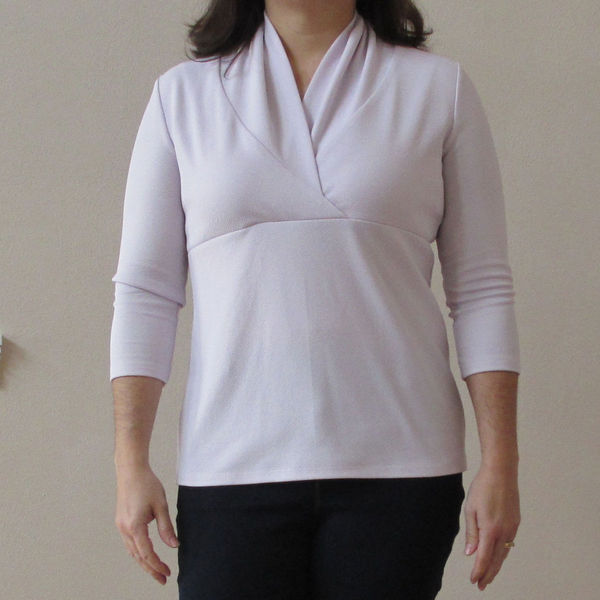 I know I eased my collar from shoulder all the way to the end of the crossover.

Pic above clearly shows that collar is stitched to within about 2″ of the end point. Huh? How did I miss that?

So I pulled out the pattern; compared with my copy and realized I had missed this mark;

I had persuaded the collar to extend at least 1.5″ further than the designer drafted. The other thing I remember doing is matching the shoulder marks on the collar with the bodice. That would be wrong because the garment shoulder changed when I stitched the shoulders deeper. Last thing I check was did I cut the collar on the correct grain?  Which I did. So the question now is, are those two changes enough to have distorted the final garment as badly as it was?

Only one way to find out, cut new fabric.  My next fabric is a marketed as a Liverpool Knit. I know there are people who are over-the-top about Liverpool knit, but honestly, I don’t like it. It reminds me of the cheap double knits of the 60’s. On top of that, I’m not in love with the print.  It looked better on the internet than in my hands.  But that makes it perfect for this second Kendall. I’m just not sure the Kendall will work for me and don’t want to sacrifice another very nice fabric. Besides, after this I have only 1 piece of Liverpool left.

I laid out, cut and I again basted back, both front bodices and this time I inserted the collar. I moved the shoulder marks on the collar to correspond with the new depth of the shoulder seam. I slipped the shell over my head and let out my  breath. Apparently I was holding my  breath, unsure of the possible results.  It was as comfortable as the first fitting of my first Kendal and now crossed in front correctly. 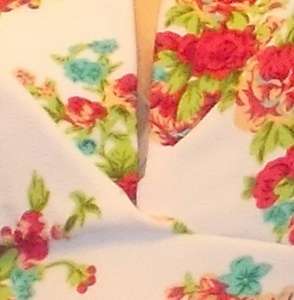 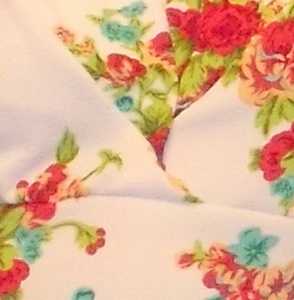 I cut and applied the facings which presented me with another delimina. The bottom edges of the right  facing would not meet. As I thought about it I realized the difference was probably a result of my asymmetrical shoulder alterations.  My alteration is simple, I stitch the right shoulder deeper than the left That does of course shorten the neck length on the right side and explained why the facing was longer.  I trimmed the facing to the same length. A mistake which I did not realize until after I had finished the garment. The collar meets beautifully at center front above. It does not in the finished garment. 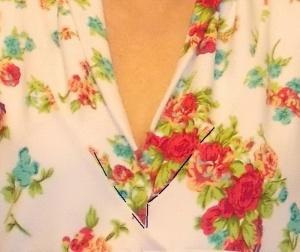 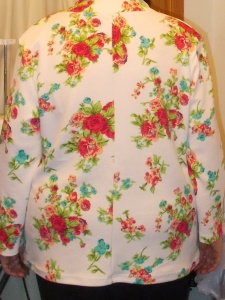 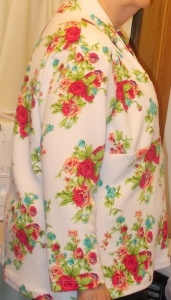 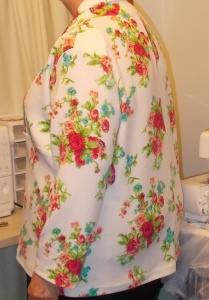 I think the killer though is the depth of the neckline.  Even with collar inserted and  pinned as it is here 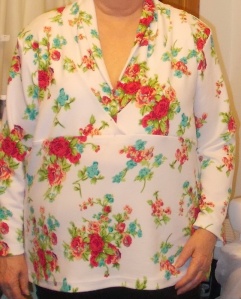 that neckline is far too low.

At least I don’t regret the waste of this fabric.  It was called Liverpool knit.  I know others rave about it but I am reminded of those horrible double knits I wore in the 60’s which stained, snagged and looked dreadful.

I could spent more time adjusting shoulders, back, neckline, collar. Truth is I already spend  all my patience on pants.  I have none left for difficult to adapt tops especially since my sloper works so well when used properly.  I’ve decided this pattern is not for me.  I finished the garment but both it and the pattern are in the donate box. Good luck somebody else.

(((((((((Side note)))))))) I received several comments (some private) after publishing my first Kendal, that this pattern had simply not worked for them.  They were terrific morale support as the said it really could be the pattern and not me.